So, as those of you who have both read my last few posts and can do basic math may have realized – I had a kid.  And I survived. END_OF_DOCUMENT_TOKEN_TO_BE_REPLACED

I’m not hurt if you don’t.  I’ve been neglecting the hell out of this blog.  For any of you who may have been emotionally invested in my ramblings, I am deeply sorry.

I have an excellent reason though: my brain no longer works.  (Pregnancy brain – I thought it was an excuse people made for poor work performance and that it wouldn’t happen to me, but seriously you guys, it is real and pretty freaking humbling.)  Specifically, I cannot stay focused on anything for more than a couple of minutes.  END_OF_DOCUMENT_TOKEN_TO_BE_REPLACED

I’m not really sure why I just heard about this, but it has recently made it onto my radar that a company in the Netherlands is recruiting volunteers to help colonize Mars.  I gather they made some kind of announcement in January and then started actively advertising that they wanted volunteers in April.  And thousands of people have already applied.

First those little robot vacuums and now this?  I think we can safely say we live in the future, my friends. END_OF_DOCUMENT_TOKEN_TO_BE_REPLACED

That there is probably the most misleading post title I’ve ever written.  But I can’t say that I care.  (I’m afraid I’ve become a bit apathetic about the old blog lately.  Can’t really explain it, but I like to think it’s a phase.)

I am not currently tangoing.  For one thing, I’m home alone.  For another, I don’t even know how to tango.  I took some lessons once.  They didn’t go well.  In fact, if they had carried on, they may well have ended my marriage.  And I wasn’t even married yet then.  Either that or we might have eventually learned to tango.  That would have been cool.  I’d like to know how to tango.  Like the parents on the Addams Family.  Hmm.  Maybe we should try tango lessons again.  Ack!  No!  See, folks, this is how you get yourself in trouble even though you know better.  END_OF_DOCUMENT_TOKEN_TO_BE_REPLACED

I believe in celebrating.  Life is good.  Any excuse.  But sometimes the traditional methods just don’t work for me.

Take today.   Today is St. Patrick’s Day.  But I don’t drink.  And I don’t own any green clothes.  I don’t think Vancouver has a St. Patrick’s Day parade, and to be honest, even if it did, I probably wouldn’t go because I’m not a big parade fan anyway.  (Except that parade they have in the evenings in Disneyland.  That’s pretty wonderful.) 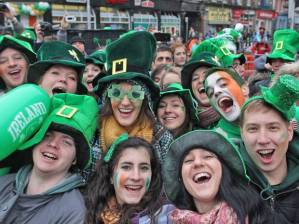 Photo from The Independent

So what does that leave?  I think maybe not much.  And really, there should be more options.  Here is my list of possible suggestions: END_OF_DOCUMENT_TOKEN_TO_BE_REPLACED

Let me first say that I hate hospitals.  I realize they are a wonderful thing, but I prefer to avoid them.  I spent a lot of time in hospitals as a kid.  Not because there was anything wrong with me, but because I had an accident-prone baby brother.  Accidents involving bikes, cars, fire, wood chips, glass — for someone who has been known to faint at the sight of blood, it wasn’t the most ideal situation for me (probably even less so for my brother.)  But I was cautious, and for the most part have managed to avoid being there for myself.

But now, my turn.

END_OF_DOCUMENT_TOKEN_TO_BE_REPLACED

I’m off to broker peace in the Middle East.

No, I’m afraid my conflict resolution course did not work that quickly.

END_OF_DOCUMENT_TOKEN_TO_BE_REPLACED

I like numbers a lot.  They are such a superb way of organizing things.  I love the logic of them and the clearness of what is right and what is wrong when you deal with them.  I am very grateful to whoever came up with them (was it the Greeks?).  Sometimes I like to look at non-math things in terms of numbers.  Like my life.  So here, my friends, is my partial autobiography in numbers:

END_OF_DOCUMENT_TOKEN_TO_BE_REPLACED

When we moved a few months ago, we were pretty shocked at the amount of stuff we had.  And hoarders we’re not, I’ll tell you.  But still, living in a place you end up with a lot of things.  It just happens.

So in an attempt to simplify (and enter the new millennium) we bought one of those iPods that has a bazillion gigabytes and decided to put all of our music on it and get rid of our CDs.

Now.  I think I bought my first CD when I was about 14.  My husband might have even started a bit earlier – I don’t know.  But my point is, we had a lot of CDs.  And you know, even though you don’t want to get rid of them, there are a lot of old ones you really don’t listen to much anymore, so they go to the back of the collection and you kind of forget about them.

But now they’re on this little machine.  They aren’t ordered by newest or most popular.  No.  They’re ordered by alphabet.  Unless I want to stick with musicians starting with A, they’re all more or less equally accessible.

So as I scroll through this endless library, I come across this great stuff that I haven’t listened to in ages.  It’s fantastic and nostalgic and just really happy.

And now I’ve got Rhapsody in Blue on.  I can’t remember the last time I listened to it.  But that clarinet at the beginning still just completely slays me.  Bliss.

I’ve recently discovered, to my utter shock, that I can make people do things.  I’ve only just figured this out, so I don’t know if it’s a new thing, or just something I never noticed before, but it’s like suddenly finding out you have a super power, to be honest.  Here’s the evidence I’ve built up around my theory: END_OF_DOCUMENT_TOKEN_TO_BE_REPLACED