I went traveling again, chickens.  And I went alone. 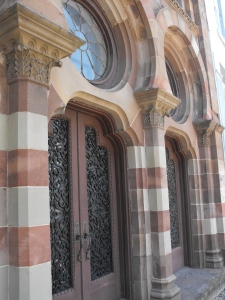 One of many gorgeous buildings in Charleston

I haven’t traveled alone in quite a while, to be honest.  My husband is my usual travel partner and I intersperse that with occasional short trips with a friend or my mother.  A ten-day trip by myself though, it’s been a while.  And it’s a whole other kettle of fish.  But there’s something to be said for that kettle.

When you are alone, there is no one to consider but yourself.  You don’t have to make any compromises whatsoever.  You can make plans for the day and then break them for no other reason than that you just don’t feel like it anymore.  And you don’t have to feel bad that someone is going to be disappointed about that.  You can unilaterally decide where and when to eat, what side of the street to walk on, and when to have naps.  (I love my naps.)  It’s kind of wonderful.

When you are in a long-term relationship, there is also the side benefit of having a chance to miss your partner.  I don’t think the loveliness of a reunion after a week or two apart can be overstated.

In case you’re wondering, I went to Charleston and Savannah.  I understand that these are major tourist destinations for Americans, but here on the West coast of Canada, when I told people where I was going, they all said something along the perplexed lines of, “Huh.  I don’t know anything about those places.  Do you have family there?  No?  How did you pick that?”  And I can’t say I even had a satisfactory answer.  The truth is that I thought Charleston sounded like an interesting name and when I looked it up on the internet, it looked pretty.  And I figured that while I was in that neck of the woods, I might as well go to Savannah too, because it was close and I had also heard of it.

Both were lovely.  Old.  Monied-feeling, Charleston more so than Savannah.  I did a lot of wandering around.  Looked at water and mansions and shops and cemeteries and art galleries and pretty trees.  Tried some southern food – what little of it was vegetarian-friendly anyway – grits, which I’m afraid I have to give a solid thumbs down; and praline pecans, which taste like you’ve decided to just melt some sugar and eat it.  Misguided.  I won’t tell my dentist if you don’t.  I read some books, including a re-read of Gone With the Wind, because that seemed appropriate.  (It’s ok to enjoy problematic things if you are aware they are problematic, right?)  It provided some historical context. 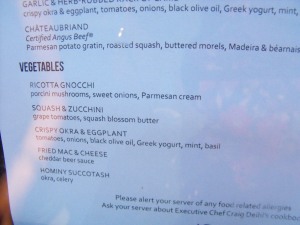 Apparently fried macaroni and cheese is now a vegetable. This is not the only place where I saw this, in case you’re wondering.

The weather was hot and humid and foiled my early ambitions to be a do-everything tourist.  Can’t say I have any regrets on abandoning those plans though.

It’s always a little strange traveling to the States for me.  Culturally, the differences aren’t always immediately obvious, but in the back of your head, you know they’re there.  I know every time I cross the border, a small tension presents itself at the base of my neck sourced entirely from the knowledge that any person I pass could have a gun in their purse.  When I mention this to American friends, they tend to shrug it off, but then how do you explain this magazine I saw: 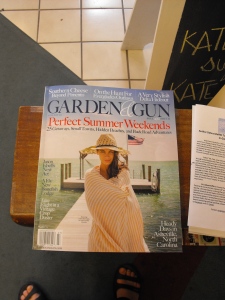 I try really hard not to buy into cultural stereotypes, but the very fact that this magazine exists reinforces all of them at once.

There are also all the genuinely and extremely nice and helpful people in the service and sales industries.  I’m always a little stunned by how happy they seem to be helping me.  (When you aren’t used to it, it can be a little intense, not in a bad way, but maybe in a way that suspects they might try to recruit you to their cult later.)  I’ve waitressed and bartended and worked in retail.  I think I was pretty decent at it and was friendly and helpful.  But I also think that if I had tried it in the US, I never would have got any tips, because in comparison to the people there, I would have been seen as surly.  I would think this would be because of a dependence on tips, but I see it in shops too, so I don’t know.  One theory a friend mentioned to me once and that kind of makes sense is that they have a completely uncynical and total belief in the American dream.  Whatever – it makes for a friendly dining and shopping experience.

Although those same lovely people suddenly turn into super jerks if you ask to use their washrooms without buying something first.  I don’t understand this stubbornness at all.  I’m clearly not looking for a place to shoot up, so I don’t know what they think I’m going to do back there, but they will not budge.  Even the Starbucks, and isn’t half the point of Starbucks to provide a washroom for people who are out and about?  (No?  Well, I’ll be damned.)  As someone with a tiny bladder, I find this infinitely annoying.  If I had to buy something at every place I needed to pee, I’d be broke in a week.  But I console myself with the idea that what goes around comes around.

And then there’s the accents.  I kind of love the accents.  And one lady called me baby doll when she gave me change for my juice at the corner store.  I don’t know why, but this tickled me. 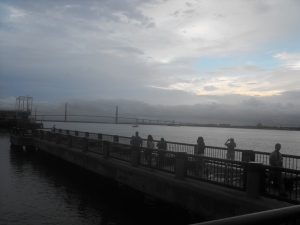 Now, you know how I was saying that traveling alone is fab?  Well it is, it really is.  But the thing is, I’m not a total introvert.  (I did a test once.  I’m not an extrovert either.  Turns out I’m somewhere smack dab in the middle.  Which I’ve decided makes me a vert.)  I need human contact sometimes and the prospect of ten days all on my own made me a little antsy.

And then I remembered that my friend “Katie” lived in North Carolina.  For those of you who are a little sketchy on your geography, that would be the one right above South Carolina, which happens to be where Charleston is.  So I emailed her and said, “Hey lady.  Come explore Charleston with me.”  And she was game.

Here’s the thing though.  I’d never met Katie before.  She’s another blogger, see.  Her blog regularly cracks me up with her near-constant analysis and existential angst regarding pretty much everything.  I’ve been reading her for years and she comes and visits over here sometimes too.  So I felt like we were friends.  But I won’t say it didn’t occur to me that “Katie” was actually a psycho killer guy and “her” blog could actually be a long-term, elaborate, and perhaps not especially effective method of luring out unsuspecting solo female travelers so “she” could have “her” wicked way with them.  Or something.

I have my paranoid moments.  What can I say?  You read about stuff like this.

But, as with any relationship, at some point you just have to make that leap and trust your instinct that a person is who they say they are and doesn’t have plans to chop you up.  In this case, my instincts proved solid.  Katie is a lovely woman who I spent a very pleasant three days touring Charleston with.  I met a new person!  It was fun! Hopefully she comes to Vancouver one of these days and I can show her the belugas and the seawall or something.

Score one for taking chances.

© 2016. Everything written in this blog was written by me unless otherwise noted. Please do not pretend it was written by you. If you want to use some of it, I'm ok with that, but please give credit where credit is due and link back to me. Otherwise I might get sad. Or litigious.
Loading Comments...
%d bloggers like this: