I am a vegetarian.  One thing I’ve noticed about being a vegetarian is that when people find out, they often feel a need to defend their dietary choices to me.  (As though I sit around judging all the world’s meat eaters all the time.)  The strangest one I ever heard was a girl who said, “I’m mostly vegetarian, but I eat fish.  Eating fish is ok because fish don’t feel pain.”  Ok, seriously?  What?  Says who? If you want to eat fish, go ahead, but don’t go around making up crap like that to justify it to yourself.

Anyway, I bring this up because  as much as I laughed at that girl all those years ago, I think I may have been guilty of the same type of fish prejudice.  I have some fish, and to be perfectly honest, I never really thought they had much in the way of complicated inner mental workings or emotional lives.  It would seem I was wrong.  Did you know that fish could be suicidal?  Apparently they are much more complex and inclined to moods than I had supposed. END_OF_DOCUMENT_TOKEN_TO_BE_REPLACED

If we were to sit down and make a list of things that drive me a bit mental, near the top of that list would be the fact that I can’t speak French. 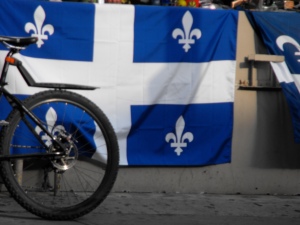 It’s not that I expect to magically be able to speak French without any work.  Yes, I could still study it.  My time isn’t up and I have a functioning brain.

Why this frustrates me is that I did study French in school.  For ten years.  And I didn’t slack off or anything – I got A’s.  You’d think that would be enough time and effort to have at least a solid grounding in any language.

Now, I get the “use it or lose it” principle.  It’s obviously sound.  But ten years, even if it was a long time ago, that should be worth something, surely.  People say, “Oh, once you’re somewhere where they speak it, it’ll all come back to you.”  Mais non.  I just went to Montreal, and while I did mostly fine with reading signs, any time anyone spoke to me, I was stuck giving them panicked and helpless blank looks.  It may as well have been Russian.

All those years of studying, countless hours of doing dialogues and dictations and oral exams and on and on – apparently a complete waste of time.  I wish I had known that then.

I often think that if I were given the opportunity to run the world, I could significantly improve it.  I know that makes me sound like some kind of egomaniac, but honestly, it seems like every time I turn around, there is another thing that is deeply flawed.

If I were giving the world a performance review, it would not do very well at all.  (“Shows difficulty working in a team environment.”  “Unfortunate inclination toward forming cliques.”)  But in this bizarre hypothetical human resources situation, I also wouldn’t fire the world, because there’s a lot of potential for positive growth there too.  I have lots of ideas about how things could be better.

END_OF_DOCUMENT_TOKEN_TO_BE_REPLACED

Saw this at a bus stop in Gibsons. 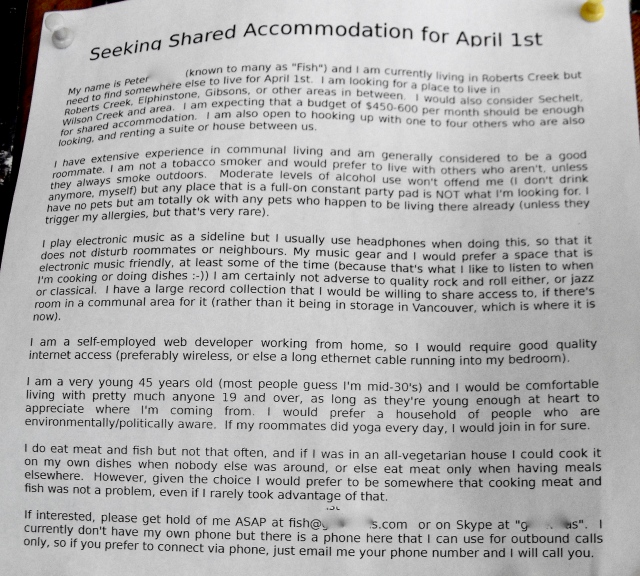 And I haven’t seen a fraction of it.  But this last weekend, I covered just a little bit more, and it was lovely.

On Friday afternoon, the sun came out.  On Saturday morning, it was still there.  END_OF_DOCUMENT_TOKEN_TO_BE_REPLACED

Picking out just the right kleenex box design.  Seriously, I can stand in that aisle for 40 minutes at a time.  It’s pathetic.

Statistics can be presented in a variety of forms. Charts tell you all sorts of things in a way that is easy to understand.

So, WordPress has this great statistics feature that allows me to see the terms people searched to get to my blog.  Ever since I put up that post about the mysterious fork in my kitchen (which has since disappeared in an equally mysterious manner), I have been getting a few hits a week from people who are apparently searching for forks on the internet. END_OF_DOCUMENT_TOKEN_TO_BE_REPLACED

It’s that strange week between Christmas and the New Year when going to work makes you feel like you’ve entered the twilight zone.  Maybe you have this week off, in which case maybe it doesn’t seem weird to you; it just feels like part of Christmas vacation.  But when you have to go to work that day after Boxing Day, nothing feels quite right. END_OF_DOCUMENT_TOKEN_TO_BE_REPLACED

There are moments in life where you make a decision — for whatever reason — and the immediate result is such an unequivocally brilliant improvement on what you had been experiencing until then that the joy of the improvement is somewhat diminished by the fact that you are kicking yourself for not having made the decision ages ago.

This just happened to me.

Must stop kicking myself.

Note to Self:  If something isn’t good, do something about it now.  Don’t wait for it to get worse first.  That’s just a waste of precious time.

Update: Apparently that was overly cryptic and implied that I had quit my job.  I did not quit my job.  I simply dumped a bad teacher for a much better teacher in a course I was struggling with because of the bad teacher.  I wish I had done it ten weeks ago.

The world of the famous is heavily populated with the bizarrely beautiful.  In the real world, people who look like this constitute maybe 20% of the population, if that.  In famous world, the number is more like 80%.  Maybe higher.  (I am totally making these numbers up,  so in case you were trying to verify them, you can stop now.)  This is not a coincidence. END_OF_DOCUMENT_TOKEN_TO_BE_REPLACED