Ok, ever since I moved to Vancouver about six years ago, I’ve been hearing about the Richmond Chinese Night Market.  Now the name alone was enough to provoke my curiosity.  I love Chinatowns, and I love open-air markets, and I love the idea of having such a thing in the evening instead of 10 am on a Sunday or whenever they usually happen.

Also, a bit of background for those of you who aren’t familiar with Vancouver: Chinatown here isn’t all that big.  Yes, it has Chinese people, but it’s nothing compared to Richmond.  Richmond is out in the suburbs and it seems to be where a large part of our Chinese population has chosen to settle.  It has entire areas you can drive through that don’t have any signs in English.  It’s kind of awesome.  So presumably a Chinese night market in Richmond would be the real deal.

Then there was the talk of the interesting foods, the tacky wares and the mobs of people.  And the anecdotes of people who’d say things like, “Oh this?  I got it at the night market.  It was crazy cheap.”

Part of the queue for the market. It was really long, but it went really fast.  Lucky for me since I don’t do well with suspense.

Somehow I never made it out there though.  Richmond always feels really far away, although I think it’s under an hour to get there since they introduced the new skytrain.  And there were rumours of it being awkward to get to if you didn’t have a car (me.)  But then they opened up a second, even bigger one right at the skytrain station, so no more excuses.  (Big controversy about this one – $1.50 entry fee.  I guess the old one is free, but really, what can you get for $1.50 these days?  Surely not an evening of entertainment.)

This is the welcome you get when you cross the parking lot to the night market.

So last Friday I went.  It was so many levels of excellent, I don’t know if I can explain them all.

I didn’t know it was the largest in North America. Nice.

First there was the food.  Rows upon rows of stalls selling deep-fried everything.  Cheesecake?  Sure.  Butter?  Why not.  Mars Bars?  What are you, an amateur?  Slap some bacon on that first!

Because why wouldn’t you deep fry a twinkie?

It wasn’t all deep-fried though.  There were a lot of dim sum type things and seafood things and strangely flavoured ice creams too.  Also something called a Mango Yummy which was made of mango (and ice cream and sweetened condensed milk) and which was indeed rather yummy. 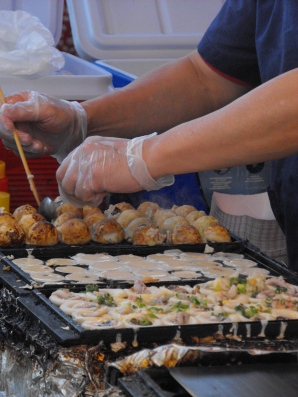 I actually did eat some of these. (No deep-fried twinkies for me.) They were pretty nice, but I kind of ruined them with wasabi mayonnaise. Here’s a safety tip, my friends: wasabi mayonnaise is not wasabi-flavoured mayonnaise, as one might assume. No, it is actually just liquid wasabi. If you cover something in it and then attempt to eat that something, you will burn out your sinuses.  Now you know.

Also, there were rotatos, which we had three separate people describe at “potatoes shaped like tornadoes.”  Which seems like an oddly specific and random way of describing something.  I was amazed that three unrelated people did it.  There is a picture below.  Is that how you would describe one of these?  I’d probably just say spiral.

This was actually pretty good.

And then there were the things to see.  Lots and lots of plastic junk?  Check.  Jellyfish aquarium with uplighting?  Check.  Little Asian guy doing karaoke rap songs while dancing?  Check.  Also, the wishing tree forest, pictured below.  People had tied all their wishes to these trees.  It was lovely.  And reading them was nice.  It looks like pretty much everyone wants the same things: health, love and happiness.  Sometimes luck and sometimes fortune.  Sometimes video games.  But mostly health, love and happiness.  My favourite: “I wish for world peace and for my mom to buy me brown contact lenses.”

Wishing tree. I thought this was legitimately cool, actually. (As opposed to ironically cool, which kind of applied to everything else there.)

Possibly my favourite find at the night market was this:

Sparkly contact lenses to make you look like a Barbie Doll. I don’t know if I even have words for how this makes me feel, but this is a very special kind of awesomeness right here.

That’s right my friends.  Glittering eyes like Barbie Doll.  I kind of love that this exists.  At the same time, I wonder if it is one of the lesser-known signs of impending societal collapse.  Perhaps these started showing up near the end of the Roman Empire.  I guess time will tell.

Meanwhile, if you happen to be in Vancouver before October and you’ve never been, go.