This guy is statistically likely to be much better than me.

My family tree is heavily populated with the artistically inclined.  They range from the talented amateurs to the extremely impressive/ could probably be seriously famous with the right marketing.  Unfortunately for me, this part of my genetic code has chosen to pass me by: I am challenged by stick men.

This is frustrating.  I love art.  I took art history in university.  I would love to have artistic talent.

So sometimes I go to art stores and get inspired by the supplies – the paints and the pastels and the blank canvases full of potential.  But should I take that next step of buying these supplies and taking them home, the canvases lose their brilliant potential in my hands.  Instead they take on a whole other menacing persona, that of the Intimidating White Sheet of Death.   Ok, a little dramatic, but whatever.  The menace comes from the knowledge that the second I hit that surface with paint, ink, or pastel, it will immediately change from white potential to blob of mess.

As a result, I mostly confine my artistic endeavours to colouring with little children in their colouring books.  (I can stay inside the lines!  My parents are so very proud.)

But yesterday, my friend the genius social planner decided we should try out this new place in Langford, Danielle’s Paint-Your-Own Pottery Studio.  No, it’s not an actual pottery studio.  I would love to try pottery one day, but am self-aware enough to realise it would take longer than one evening to produce anything worthwhile.  Basically, it’s a paint your own ceramics place.  You go, buy a white ceramic thing (choices range from knick knack dinosaur figurines to vases and sushi platters), paint it however you like, give it to them to fire, and pick it up a few days later.

Challenge number one was deciding on something to paint.  The figurines were appealing in that they had separated bits that you could paint different colours, thus rendering my creative lack irrelevant.  I am not, however, someone who has any use for figurines.   No one’s running out to award me the title of domestic goddess, and this might be because of my aversion to dusting.  Said aversion means that I try to avoid accumulating things that may eventually need to be dusted.  (This is similar to the way I attempt to avoid buying clothes that will eventually need to be ironed.  I am less successful on that front though.)  The gigantic platters and vases that attracted me were out of my budget range, so after much deliberation, I settled on two cereal bowls.

Challenge number two, then, was being faced with new artistic nemeses: the Intimidating White Cereal Bowls of Death.  There were options for stencils and effect of all sorts, as well as the unfathomable idea of free-painting designs.  Understanding my artistic limitations, I decided to go for a mainly solid blue covering with an abstract tone-on-tone line design and some small pale pink flowers on the side.

I believe I was mostly successful.  (Low expectations prevent shattered dreams.  There’s a tip to share with your kids.)  (As you might have guessed, I am contemplating a career in motivational speaking.)  The flowers looked a little blobby, but hopefully they should be ok.  I say hopefully because the paint goes on in a light pastel way and you don’t get to see the actual result until two whole days later, after it’s all been fired.  This does not mesh well with my preference for instant gratification, but I have heard rumours that practising patience builds character or something, so I’m sucking it up.

This may well have been the least frustrating artistic experience of my life.  It was also a lot of fun.  I would recommend it to any artist wannabe looking for a wild and crazy way to spend a Thursday night. 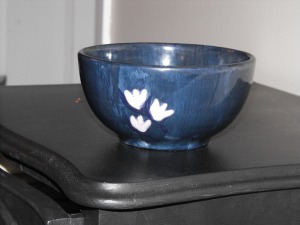